Why is the terminal still something important in the year 2019 you might ask. There are GUI applications for literally any purpose, so why bother setting up a terminal environment where you have to enter complicated commands?

It surely depends on the kind of work you are doing, but for most engineers and developers, a neat terminal setup provides some crucial benefits. First of all, this kind of workflow has to be embraced and is not for everyone. I moved most of my workflow (except Email and Web-Applications) to the terminal while many of my colleagues prefer GUI applications for each part of their workflow. However, I love my setup for one reason: I'm much faster.

One reason for that is that I hardly need to move my hands during work. I rarely have to reach for the mouse, move the mouse to a certain location and perform a single action. My hands remain mostly in the same position while I'm working, eliminating unnecessary movement. I'm using vim key bindings as well in my setup, which for instance maps the arrow keys to h, j, k, l. This is where the fingers of my right hand are positioned most of the time.

A smart way to bind keys to certain actions allows to have multiple command prompts opened for different things and quickly be able to switch between them. I use tmux to enable this. So for instance in one split, I'm editing a source code file in vim while in the other, I'm executing git commands. I found this to be much quicker than to have two GUI applications running and using the mouse to operate them. Since I'm using the same keystrokes every day, I have memorized them, and they are performed completely automatically, without me putting any effort into it.

A second aspect is that while GUI applications might seem easier to operate, I don't believe they are generally faster to use. I have tried to use a graphical git client recently and often where stuck on where to find a certain button to perform a basic git action ("I just want to do a git rebase master, why is this so complicated?"). Surely you can train and become used to it, but then again you can just learn how to use the CLI application. Also, keep in mind that the GUI application adds one layer of abstraction, potentially making it harder to find the source of a problem.

So here is my setup as I'm writing this post: 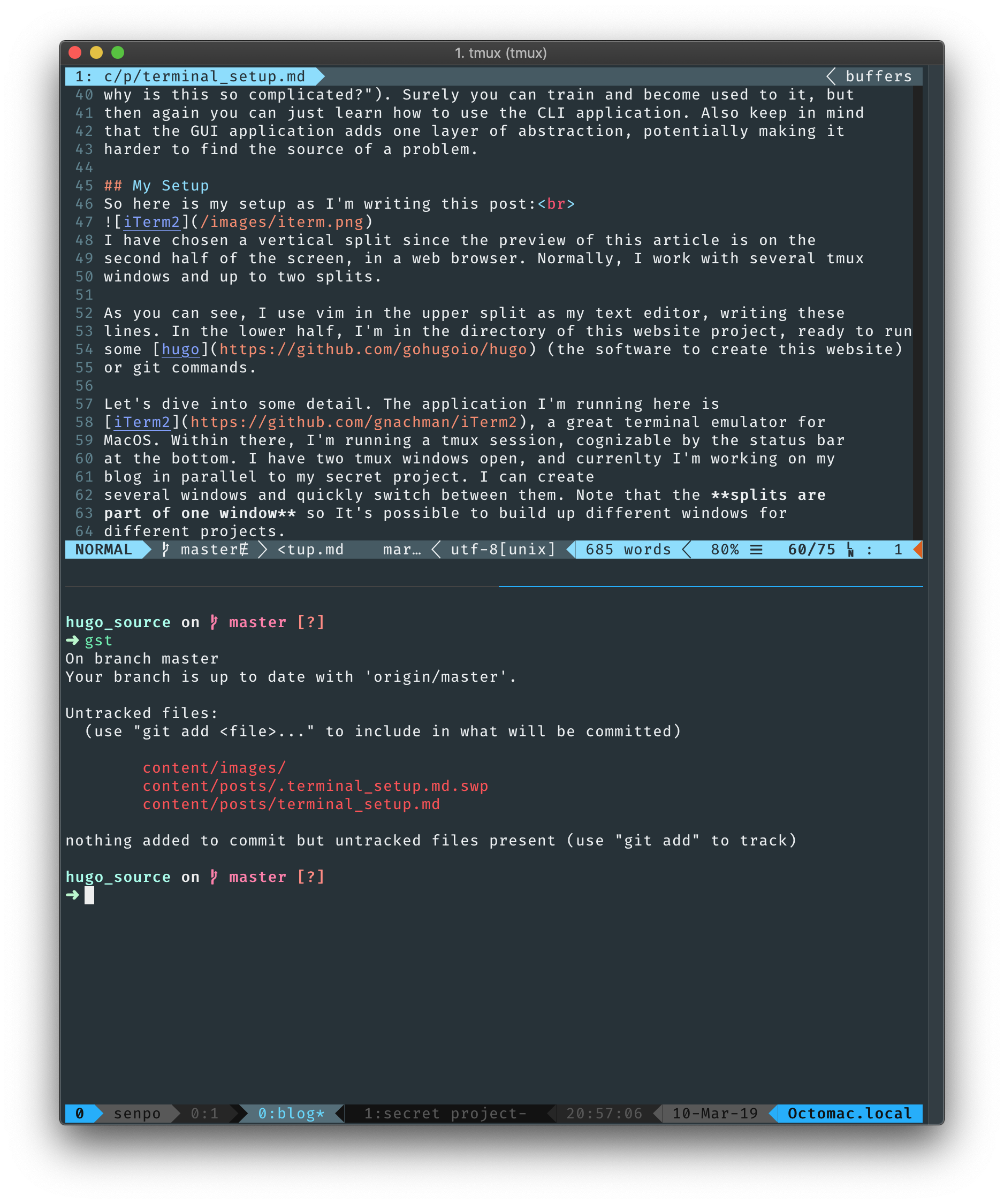 I have chosen a vertical split since the preview of this article is on the second half of the screen, in a web browser. Normally, I work with several tmux windows and up to two splits.

As you can see, I use vim in the upper split as my text editor, writing these lines. In the lower half, I'm in the directory of this website project, ready to run some hugo (the software to create this website) or git commands.

Let's dive into some detail. The application I'm running here is iTerm2, a great terminal emulator for MacOS. Within there, I'm running a tmux session, cognizable by the status bar at the bottom. I have two tmux windows open, and currenlty I'm working on my blog in parallel to my secret project. I can create several windows and quickly switch between them. Note that the splits are part of one window so It's possible to build up different windows for different projects.

I have split the tmux window in two vertical splits. I can quickly switch focus beteen them. In each split, a zsh shell is running. I'm using many extensions, mainly oh-my-zsh along with Spaceship Prompt. As you can see, I can directly see the status of my git repository without running git itself. The colors are material-dark and the font I use is called Fura Code NF. This font enables me to use glyphs as well, though I'm not missing it currently.

Some handy CLI tools I don't want to miss here are fasd, which allows me to cd to certain directories instantly, and ranger, a file explorer for the terminal.

I really love vim. In early 2018 I finally swiched to vim as my one and only editor/IDE and never looked back. I use it for anything at work and privately. There are a lot of resources on why vim is great, but I want to summarize it like this:

Vim focuses on text editing instead of text writing. In normal mode, the keyboard becomes a control panel for altering the content of a file rather than adding letters. So instead of letter keys producing letters in the file, the keys are mapped to various navigation and modifying functions. This enables an incredibly fast workflow, if you're willing to climb the steep learning curve.

Vim is extremely customizable with plugins. Plugins I use include:

There are countless settings for vim. I want to share some handpicked ones: